How Is Whiskey Made? 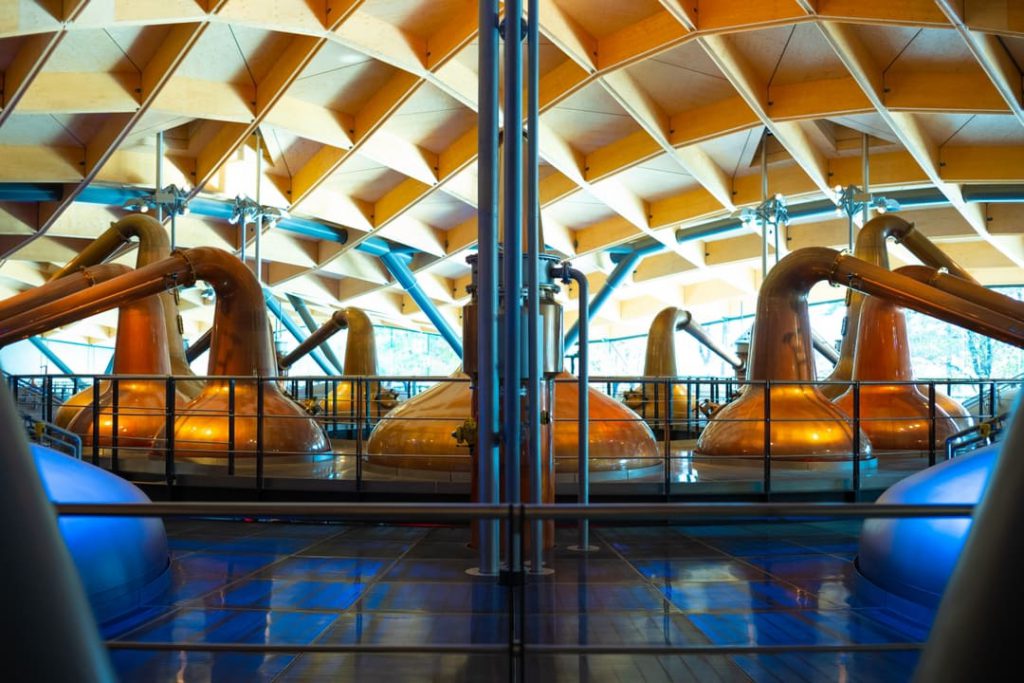 Irish whiskey is famed for its smooth taste and beautiful colour. It is aged for several years to acquire value – but how is it made in the first place?

The process of whiskey making is relatively straightforward. Like many other alcohols, it is fermented and distilled, but that’s not all it takes to create whiskey’s unique flavours.

Whiskey starts its life as raw grains, usually barley. It is moistened and germinated to help convert starch to sugars until this is stopped by heating it.

Scotch whisky dries the barley with peat smoke to give it a smoky flavour. However, Irish whiskey forgoes this in favour of a smoother taste.

After the barley is malted, it is then mashed. The grains are added to a large tank, called a mash tun, or tub, with hot water. Here, the grains and water are stirred. This extracts the sugars from the barley so that it can go onto the next stage – fermentation.

Fermentation is the process in which yeast interacts with the sugars in the barley, corn, or rye. Here, these grains are converted to alcohol, a process that can take forty-eight to ninety-six hours. It is during the fermentation process that the different yeast strains yield different flavours.

Once fermentation is complete, the resulting liquid goes into the still. Before being distilled, the liquid only contains 7-10% alcohol by volume (ABV). However, distillation increases the alcohol content and brings out the delicious flavours that we know and love in Irish whiskey.

When made, whiskey is distilled. This means it is heated, vapourised, and then condensed back into liquid form. Alcohol has a lower boiling point than water, and so as the liquid is heated, it boils off and rises before being condensed into a liquid once more. Although this increases the ABV to around 20%, it needs to be stronger to be classed as whiskey, so it is distilled once more.

Unbeknown to many, Irish whiskey can be double distilled or triple distilled. The more it is distilled, the lighter the final spirit is, although this lightness can be countered by the casks it is aged in.

The final distillation of Irish whiskey is around 60-70% ABV. However, by the end of the process, this reduces to approximately 40%. Distillers often discard the ‘heads’ and ‘tails’ of the spirit as they contain flavours that would otherwise detract from the final product. What remains is called the ‘heart’. This is then added to barrels and aged for several years.

This process is thousands of years old and can be dated as far back as Aristotle. Some historians theorise that distillation originated in kitchens and that women may have had a hand in designing the first whiskey stills to distil liquid.

As noted above, whiskey is distilled in large structures called stills. These stills have a sizeable bulbous bottom and a long arm connecting them to a second vessel. Other types of stills brew different types of whiskey, such as the continuous still, which is also known as a Coffey still. These stills influence the flavour of the whiskey, as does the amount of time that it is distilled.

Using pot stills is an increasingly popular way to create whiskey. Pot stills are often made of copper, which helps enhance the resulting whiskey’s flavour profile and a more significant amount of the raw flavour than other stills.

Typically, pot stills take longer to create a large amount of product as they have to be emptied and cleaned between batches. However, although it is slower than other methods, it produces such a high-quality product that distilleries continue to use it to this day.

Continuous stills work slightly differently from pot stills. Instead of having two separate elements that collect the finished product, continuous stills consist of one single column that filters the vaporised liquid through plates that capture any seeds and husks left in the mixture.

This style of still can generate considerable amounts of whiskey as it can constantly run without needing to be stopped and emptied. Continuous stills are also known as Coffey stills, named after the Irishman Andreas Coffey, who designed the stills that are prevalent across the entire brewing industry.

Do you have a favourite way that whiskey is made? Do you prefer double or triple distilled? The beauty of Irish whiskey is that there are so many varieties that it is almost impossible to pick a favourite!